I love being a woman.

I’m a woman who has experience being a wife, a mom, a student, a teacher, and a degreed business professional. I’ve traveled throughout the U.S. and have been to Europe, too, but am greatly fond of western Michigan and its beaches, and the entire Midwest region. My journey is relative to my time, of course. I’m a straight-laced conservative when it comes to education and career, yet a child of the 60’s; a hippie you might say, when it comes to enjoying life. It’s been quite a ride!

My favorite things are my grown children, Ashlee and Krystal, my Colonel hubby, Scott (retired from the military after nearly 30 years but continues to work a civilian job), my mother, Kathy (a pioneer for women who worked in the factory at General Motors from the early 60’s until retirement 27 years later – but who is first and foremost a gentle woman with a strong soul and my forever role model), my pets (Japanese Chin dogs Jake and Lucy, and my kitties, Bliss and Salem), beaches, dragonflies, hummingbirds, and other nature. I might seem complicated at times but truly love the simple things.

My little place in the world, that’s my blog. I’ll be sharing my thoughts about my life, my family, my pets, my job, and how I view the world. I hope you enjoy my stories, my sense of humor, and my insight. This is a chance for us to share that cup of coffee or tea in the morning or afternoon, and reach across the miles that might separate us, and gather close together to catch our breath and a laugh or two. Life is busy. And so are we! So let’s dive in together. And smell the roses, too.

Thanks for dropping by.

What Doesn't Kill You Makes You Stronger: Near-Drowning in the Rapids

Scott and I were in Colorado in June. While there, we took our daughter, Krystal, and her boyfriend, Peter, whitewater rafting on the Poudre river Sunday, June 28. I have always had this on my bucket list and was so excited! The rafting company in Fort Collins offered rafting on class-two rapids on the lower Poudre and class-four rapids on the upper Poudre. Being first-time rafters, we selected to go on the milder class-two trip in anticipated of a fun day on the river. The rafting company has a photographer who takes photos and we purchased the photos shown below.

Unfortunately, we were not informed that the river was extremely high this summer, and that it is very dangerous to be on the river whether upper or lower. The rafting company never mentioned this to us in our fifteen minute or so "briefing" we received shortly before embarking and signing a liability waiver. So when we got on the Poudre that day, we hit class three/four rapids within a few minutes, nearly capsizing the raft, tossing me out of the raft, our "expert" guide also tumbled into the water, and Scott fell in, too! It was the worst for me because I bounded out backwards and headfirst into the river, just missing a large boulder as you can see from the photos. The guide is pictured in blue and mentioned he arrived in Colorado "about a year ago" and gave us no indication how long he has been an "expert" guide on the Colorado river. Scott also fell overboard trying to grab me. I was in an orange and grey shirt, Scott was wearing a green shirt and Peter is pictured in the white shirt with red life jacket, while Krystal is wearing a black tank top  with red life jacket - Krystal and Peter were in the front of the raft. In one photo you see two red helmets in the water - Scott and me! 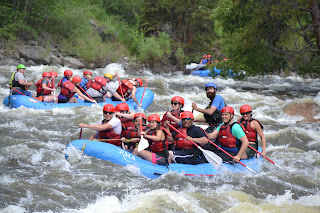 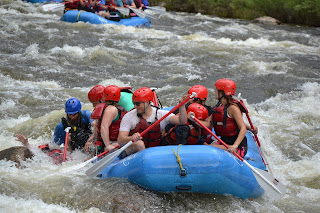 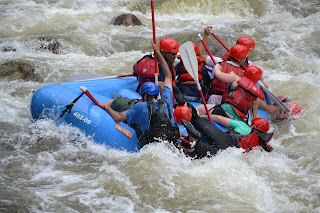 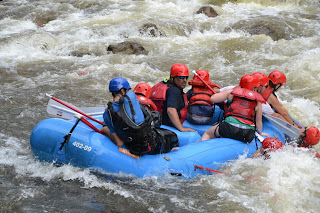 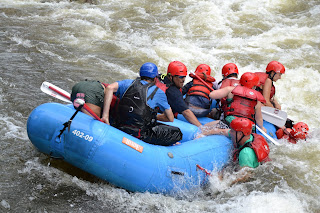 Posted by Marie Haraburda at 5:24 PM

Marie Haraburda
Spencer, Indiana
Marie is a co-owner of Haraburda LLC. She has worked the past 20 years in positions ranging from non-profit leadership to executive positions in the corporate world. Marie currently works as a Career Coach for Indiana University’s Kelley School of Business in Bloomington, Indiana; considered by many to be one of the top business colleges in the United States.